The numeric value of a card, which appears just above its suit icon in either corner. Cards with higher ranks are commonly more valuable than cards of lower rank.

Pilatch uses fifteen different ranks. Ace is the highest rank, followed by King, Queen, Jack, 10, 9... and so on... 1 is the lowest rank. Ace, King, Queen and Jack appear on cards abbreviated as the letters: A, K, Q, J, respectively. The Joker rank is denoted by a star. Each game may define how Jokers interact with other ranks.

Roshambo
- noun A game played with three hand signs that represent rock, paper, and scissors. Details
Suit
- noun A family of cards. Each card in a suit will bear the same icon on two of its corners. Pilatch has three suits: Rock, Paper, and Scissors.
Suit-Aligned
Refers to a quality of the Jokers in some games, where a Joker has the suit of the symbol printed on it. Further behavior of the Jokers may differ between games.
Superior Suit

For any card, its "superior suit" beats the suit of that card. 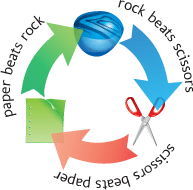 Example: The superior suit to the Ace of Scissors, is Rock.

Up / Down Card
- noun Card that has "UP" printed on one side, and "DOWN" on the other.
The Ups
- noun The face up community cards in a Pilatch betting game. Two Kings are showing on the ups.
Valued Hand
- noun Refers to the third definition for "Hand" above. In poker this can be called a "ranked hand," or simply a "hand." The Pilatch rules use the term "valued hand" to prevent confusion with other definitions of "hand."